New campaign asks employers: How safe are your staff? 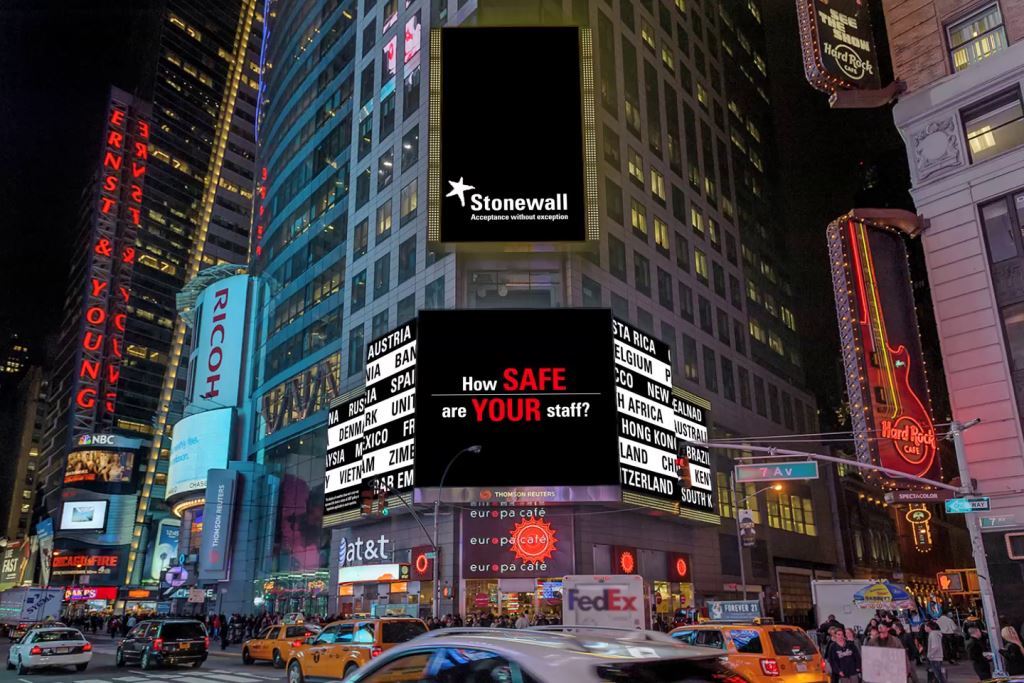 IN more than half of the world, lesbian, gay, bi and trans employees may not be protected under employment law. While the laws in Britain support equality in the workplace, British employers are responsible for protecting their employees regardless of where they are. So this lack of protection elsewhere can still put both employers and employees at risk.

However, increasingly, global employers are recognising that there is a real business benefit, as well as a compelling moral case for actively supporting their LGBT staff, according to Lynn Pasterny, international partnership officer at Stonewall, the charity for lesbian, gay, bi and trans equality.

The charity Stonewall has released a set of global workplace guides to encourage employers to create inclusive workspaces wherever they operate,. To mark the launch, an advertising campaign begins today in New York’s Times Square and London’s Canary Wharf, which asks employers the question – How safe are your staff?

So what do employers need to know?

Britain has been a leader in supporting equality in the workplace, according to Tom Moyes, a partner at Blacks Solicitors. “It was one of the countries to recognise gender identity in 2004, for example, with many others following thereafter. Employees are protected from discrimination and unfair treatment under the Equality Act 2010, which provides some of the greatest protection in the world.”

However, while discrimination and harassment in the workplace because of sexual orientation and gender identity is unlawful here, many companies send their LGBT employees on assignments to countries where LGBT people are persecuted in the law or the culture is hostile.

This means that employers who work internationally often have ‘a difficult balancing act to perform’, according to Emma Ladd, senior associate at Gardner Leader Solicitors. “They must try and act consistently across all jurisdictions in which they employ people, while maintaining a watch on the different laws which apply.”

The Stonewall global workplace guides offer advice to multinationals on how to create inclusive workplaces, wherever they operate. Working with ten multinationals – including Barclays, Thomson Reuters, IBM and Google, the charity has produced a suite of workplace guides for ten countries across Europe, Asia and Africa. The first 10 guides cover Brazil, China, Hong Kong, India, Italy, Poland, Russia, Singapore, South Africa and Turkey. A further 12 guides will be released later this year and the current guides will be updated annually.

The guides help companies empower their LGBT staff, by giving them a unique insight into a country’s LGBT rights situation so they can make informed decisions about international postings. They can also help multinational companies take their first steps in tackling sexual orientation and gender identity equality in their global workplaces.

Employment lawyer Ian Carey, director of Careys Law Ltd says: “These guides from Stonewall will be a valuable resource for both employees and employers alike in giving appropriate insight in different countries so informed decisions can be taken.”